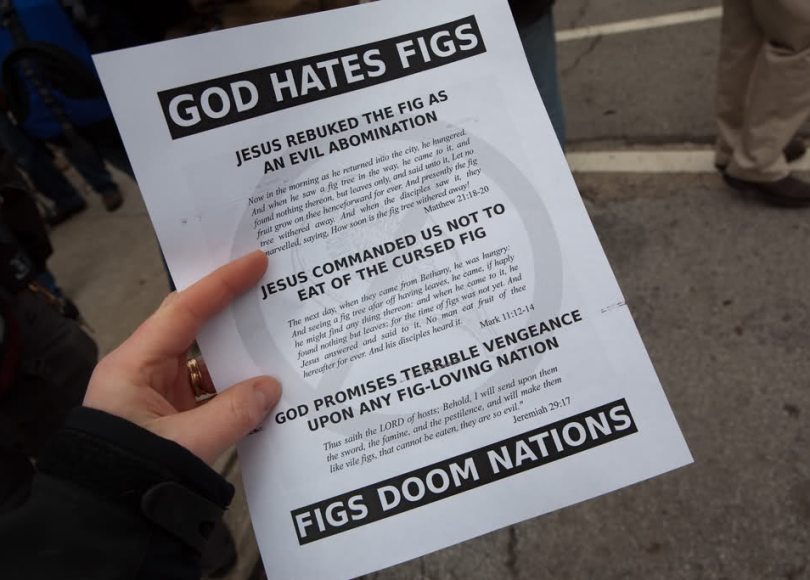 The Christian “think tank” Barna Group conducted a poll of Americans, not brought up in institutional Christianity.  They were trying to identify why Christianity was in decline in Europe and now the USA, especially among young people. One of the questions asked was, “What about Christianity disturbs you the most or prevents you from becoming Christian?” Over 70% answered by citing the church doctrine on the “Atonement of Christ”. The idea that humanity is “fallen” and so miserably sinful by nature, that the only way God could offer salvation from this ugly situation was to perform a human sacrifice with his “Son” is disturbing to many today. In addition, people feel the idea of God participating in any way with “human sacrifice” diminishes the sovereignty and morality of God. Other world religions view humanity and God in a much more positive light.  Religions such as Buddhism, Hinduism, and modern Judaism see humankind as being far from perfect and capable of huge mistakes in judgment, but fundamentally good in essence.  These religions attribute the negative tendencies of humanity to ignorance, an overindulgence in the material aspects of life,  species arrogance, pride (ego), and separation from direct communion with God. The counter against sin is the education into the spiritual lifestyle taught by Yeshua. It’s the same message taught by the Buddha in Buddhism. Krishna in Hinduism, and the prophets in Judaism.

Yeshua did not teach anything that resembled the Christian doctrine of substitutionary atonement or expiation of the sins of mankind through the blood sacrifice of a crucified messiah (or for that matter even a sacrificial animal).

Yeshua, as well as other Galilean and Northern Israeli spiritual masters, taught the opinion of the Jewish prophets, that “sin offerings” and blood sacrifices were not the means whereby sinners became justified and righteous before God.

The attitude of Israel’s many literary prophets towards sacrifice manifests no enthusiasm whatever for blood sacrificial worship of God.

Hosea 6:6:  For I desired mercy, and not sacrifice;
and the knowledge of God more than burnt offerings.

Amos 5:22-24:  Though ye offer me burnt offerings and your meat offerings, I will not accept them:
neither will I regard the peace offerings of your fat beasts.
Take thou away from me the noise of thy songs;
for I will not hear the melody of thy songs.
But let judgment run down as waters,
and righteousness as a mighty stream.

Isaiah 1: 11-12:  To what purpose is the multitude of your sacrifices unto me? saith the Lord:
I am full of the burnt offerings of rams, and the fat of fed beasts;
and I delight not in the blood of bullocks, or of lambs, or of he goats.
When ye come to appear before me,
who hath required this at your hand, to tread my courts?

Jeremiah takes the same tone in chapter 6 verses 19 and 20. He, like Amos, is expressing his scorn for burnt offerings and other slaughtered oblations and goes so far as to deny that the Israelites had been commanded concerning these sacrifices when they left Egypt (chapter 7 verses 21-28). Likewise, Deutero-Isaiah suggests the utter inadequacy of blood sacrifices as well (chapter 40 verse 16).

1 Sam 15:22:  To do justice and judgment is more acceptable to YHWH than sacrifice.

Lastly, the prophet Micah’s rejection of sacrificial religion has become the classical definition of ethical monotheism. More importantly it even mentions and thoroughly rejects human sacrifice. Strangely enough, the human mentioned for sacrifice is a firstborn son.

Micah 6:5-9:   Wherewith shall I come before the Lord,
and bow myself before the high God?
shall I come before him with burnt offerings,
with calves of a year old?
Will the Lord be pleased with thousands of rams,
or with ten thousands of rivers of oil?
shall I give my firstborn for my transgression,
the fruit of my body for the sin of my soul?
He hath shewed thee, O man, what is good;
and what doth the Lord require of thee,
but to do justly, and to love mercy,
and to walk humbly with thy God?

These are just a few examples of prophetic opinion on blood sacrifice. So what were Yeshua’s views? In all four Gospels, Yeshua performs a singular dramatic act that leaves us in no doubt as to his personal attitude about sacrifice.

During the time of Yeshua the Sadducees were the priestly sect in charge of the Jewish state and worship in the Temple. The Temple in Jerusalem functioned as a ritual slaughterhouse for Jewish worship via animal sacrifice. Animals were sacrificed literally around the clock. During holy pilgrimage festivals, such as Passover, the rate of sacrifice increased  to  unimaginable levels due to the influx of pilgrims from all over the world. During Passover, all these pilgrims needed to purchase acceptable animals for sacrifice in the Temple. It was a rule of the Temple that all sacrificial animals had to be purchased with native Jewish Temple coinage as opposed to Roman or any other country’s money. This is why there were money changers in the Temple.

These money changers provided a necessary service to Jewish pilgrims so that they could purchase their Passover animal sacrifice. The money changers were sanctioned by the Sadducee Temple authorities. Thus, the money changers fulfilled three major functions: (a) foreign exchange, (b) the changing of large denominations into small ones, and vice versa, and (c) banking. While loaning money for interest (banking) is against Jewish law, the first two services mentioned above were performed for a fee of between 4% to 8% and were perfectly legal and necessary for the purchase of sacrificial animals by pilgrims.

So let’s take a look at the Temple cleansing story in Mark. Note that Mark “sandwiches” the story of the Temple cleansing between two “before and after” stories of a cursed fig tree. This is a literary structure unique to Mark, where the before and after stories expand on the meaning of the story in between. Most scholars agree that the Temple cleansing in conjunction with Yeshua’s triumphant entry into Jerusalem before the adoring crowds were the actions that pushed the Sadducees over the top to conspire with the Romans to have Yeshua “done away with”. In the end, Yeshua died because of his strong Essene convictions against the practice of animal sacrifice.

Jesus Curses the Fig Tree
On the following day, when they came from Bethany, he was hungry. Seeing in the distance a fig tree in leaf, he went to see whether perhaps he would find anything on it. When he came to it, he found nothing but leaves, for it was not the season for figs. He said to it, “May no one ever eat fruit from you again.” And his disciples heard it.
Jesus Cleanses the Temple
Then they came to Jerusalem. And he entered the temple and began to drive out those who were selling and those who were buying in the temple, and he overturned the tables of the money changers and the seats of those who sold doves, and he would not allow anyone to carry anything through the temple.
He was teaching and saying, “Is it not written,
My house shall be called a house of prayer for all the nations?
But you have made it a den of robbers.”
And when the chief priests and the scribes heard it, they kept looking for a way to kill him; for they were afraid of him, because the whole crowd was spellbound by his teaching. And when evening came, Jesus and his disciples went out of the city.
The Lesson from the Withered Fig Tree
In the morning as they passed by, they saw the fig tree withered away to its roots. Then Peter remembered and said to him, “Rabbi, look! The fig tree that you cursed has withered.” Jesus answered them, “Have faith in God. Truly I tell you, if you say to this mountain, ‘Be taken up and thrown into the sea’, and if you do not doubt in your heart, but believe that what you say will come to pass, it will be done for you. So I tell you, whatever you ask for in prayer, believe that you have received it, and it will be yours.”

The actions by Yeshua in the temple are; 1) he drove out people buying and selling sacrificial animals, 2) he overturned tables to stop the money changers, 3) he would not allow anyone to carry anything through the Temple, and 4) he cursed the Sadducees for turning the temple into “a den of robbers”. In the Gospel of John  Yeshua beats people with whips made from cords and drives the animals from the Temple as well. This is more than just being upset with monetary transactions within the temple precincts. Yeshua’s goal is literally to STOP sacrificial worship at the Jerusalem Temple and he seems to be very passionate about the lengths he is willing to go in stopping this practice. Many people fixate on money related issues in relation to sacred buildings when reading this story, but it is likely that the money changers were targeted because of their connection to the Sadducees and their supporting role in Temple sacrifice.

So what’s going on with the fig tree? It is clearly a metaphor for the role of the Jerusalem Temple in worship. Yeshua looks for “the fruit” of the fig tree and seeing none, curses it for lack of productivity. The Temple, like the fig tree, was simply living without being productive. It was just “going through the motions” of empty ritual which was condemned by the prophets. The Temple was not being useful in guiding the Jewish people into communion with god. The fig tree is literally dead and the temple is “spiritually dead”. Yeshua ends with a lesson on the role of faith and persistence in following a true productive path to God, the practices of Teshuvah and Shalaq.

One last passage that re-enforces Yeshua’s lack of enthusiasm for a “dead” Jerusalem Temple. It turns our the Romans would make the passage below come true. In 70 AD they would destroy not only the Temple, but Jerusalem itself after 10 years of Jewish uprising. Thereby ending Jewish blood sacrifices in deference to rabbinic Judaism and Yeshua’s  spiritual practices.

John 2:18-22  The Jews then said to him, What sign can you show us for doing this? Jesus answered them, “Destroy this temple, and in three days I will raise it up.” The Jews then said, This temple has been under construction for forty-six years, and will you raise it up in three days? But he was speaking of the temple of his body. After he was raised from the dead, his disciples remembered that he had said this; and they believed the scripture and the word that Jesus had spoken.

Yeshua, like the prophets, did not sanction blood sacrifice, in any form, as a practice for the forgiveness of sins and communion with God. Yeshua’s teachings center around the spiritual necessity described by the two Aramaic words Teshuvah (meaning return to God through repentance) and Shalaq (meaning release from the consequences of sin). The daily practice of Teshuvah was the commitment or vow symbolized in the baptism of John. It was a form of spiritual at-tune-ment performed by each person every day. Individual Teshuvah was Yeshua’s doctrine for achieving at-one-ment with God.

The picture at the top of the post is an example of what happens when the Master is gone and people stray from the message. Whether it seems absurd to you will depend on what you think Yeshua actually taught.

Below are links to excellent articles in online Jewish Encyclopedias.