The Bible, or for that matter any religious scripture, is a mixed bag. This is not because of content, but because of interpretation. A rabbi once told me that good scripture is written to be intentionally vague. This allows the text to be freshly interpreted and still be relevant over thousands of years through varied cultures. Good scripture generates a multitude of diverse interpretations, all of which can be “meaningful and appropriate”.

As such, scripture can be used for comfort, wisdom, enlightenment, self-realization of God, and wisdom for the greater good of both individuals and humanity. However, scripture can also be weaponized to justify practices that result in hurt, anguish, political justification of dubious policies, self-doubt, mind control, murder, and even wars.

Exegesis: the critical interpretation of the scriptural text to discover its intended meaning, the science of interpretive principles.

The opposite of exegesis (to draw out) is eisegesis (to draw in). This is the injection of purely subjective interpretations into the text, unsupported by the text itself. Eisegesis is often used as a derogatory term.

Anyone can open a Bible, start reading, and understand the teachings of Yeshua and Christianity, right. I mean, after all, it’s pretty simple and straight forward. Well, maybe not so fast. The New Testament is a collection of books composed by different anonymous authors over a 300 year period. A few of these books (27) were eventually selected by a council of men to be canonized into the New Testament, many of the rest were declared heretical and destroyed. During the 300 year gestation of the New Testament a lot of extraneous material (tradition and myth) made its way into the editing of the NT cannon.

John Wesley, the founder of modern day Methodism, understood that the interpretation of something as complex as the Bible required more than just a simple reading of the text. He formulated what is now known as the Wesley Quadrilateral for theological interpretation (exegesis). Wesley believed that the living core of the Christian faith was revealed in Scripture, illumined by history (tradition), vivified in personal experience, and confirmed by reason. Accumulated tradition and personal experiences over 2000 years can obfuscate the intended meaning of a any scriptural passage. In addition, cultural norms change over time such that that most scripture needs to be re-interpreted in light of the current culture. Wesley could never have anticipated, back in the 1700’s, interpretation controversies such as the current BGLT issues . That is why “reason” is the final pillar for theological interpretation as well as his admonition to “do no harm”.

An Example: About The Tragic End of Humpty Dumpty

This rhyme is one of the best known and most popular in the English language. The most common modern text is:

Which brings us to the following Socratic dialogue!

Teacher: What does the text tell us?

Student: That Mr. Dumpty was sitting on a wall, lost his balance, fell a considerable distance to the ground where he broke apart and was unable to be repaired.

Teacher: Excellent, but why could he not be repaired?

Student: Because he was an egg, and when an egg breaks it’s not easy to put everything back inside and glue the shattered egg shell back together. In addition, the first responders were horses, that didn’t have any fingers, and king’s men of dubious dexterity.

Teacher: Egg, what egg, the text says nothing about Mr. Dumpty being an egg. Besides, an egg could not possibly sit on a wall, their rounded and would roll right off!

Student: Your a teacher and don’t know that Humpty Dumpty was an egg? Everybody knows that, it’s common knowledge. What a stupid statement.

Teacher: You need to focus on the question asked and the contents of the text! You are bringing in extraneous legendary content that is not supported by the text. When doing exegetical analysis one needs to consider ONLY the information in the supplied text.

Student: Hey, all my life I have known this rhyme and there was never any doubt that Humpty Dumpty was an egg. I’m comfortable with the idea that he’s an egg. Why do teachers have to come along and question stuff with all this analysis.

Teacher: I just want to know where you got the idea that Humpty Dumpty is an egg.

Student: Because it’s in all the pictures so whoever drew the first picture must have known the guy who wrote the rhyme or he’d never have drawn Humpty Dumpty as an egg. After all, once it’s written or drawn in a book it’s got to be real.

Humpty Dumpty and the missing egg go to the heart of our situation and the Wesley Quadrilateral. Once traditions and myths become fixed, they provide the lens through which everything is viewed. It becomes common knowledge and common sense. Let’s dig a little deeper into our nursery rhyme example and see what we can find.

The rhyme probably started out as a simple oral song long before it was committed to pen and paper. The earliest known written version was published in Samuel Arnold’s Juvenile Amusements in 1797 with the lyrics:

Umm… no mention of Humpty being broken in the fall, just changed. Nothing here in the first written edition to indicate, even tangentially, that Humpty is a broken egg.

Humpty Dumpty sate [sic] on a wall,
Humpti Dumpti [sic] had a great fall;
Threescore men and threescore more,
Cannot place Humpty dumpty as he was before

The book that really put Humpty Dumpty on the wall as an egg was Lewis Carroll’s Through the Looking-Glass (1872), where he discusses semantics and pragmatics with Alice. Carroll makes Humpty a breakable egg to liven up the satirical dialogue.

“I don’t know what you mean by ‘glory,’ ” Alice said.
Humpty Dumpty smiled contemptuously. “Of course you don’t—till I tell you. I meant ‘there’s a nice knock-down argument for you!’ ”
“But ‘glory’ doesn’t mean ‘a nice knock-down argument’,” Alice objected.
“When I use a word,” Humpty Dumpty said, in rather a scornful tone, “it means just what I choose it to mean—neither more nor less.”
“The question is,” said Alice, “whether you can make words mean so many different things.”
“The question is,” said Humpty Dumpty, “which is to be master—that’s all.”
Alice was too much puzzled to say anything, so after a minute Humpty Dumpty began again. “They’ve a temper, some of them—particularly verbs, they’re the proudest—adjectives you can do anything with, but not verbs—however, I can manage the whole lot! Impenetrability! That’s what I say!”

Humpty Dumpty and Alice, illustrated by John Tenniel, from a later edition of Through the Looking-Glass. So now Humpty is firmly ensconced in tradition as the “egg on the wall” thanks to mass publication.

Today we have managed to push Humpty over the top into a fully rehabilitated egg. TurboTax, a U.S. tax preparation software firm owned by Intuit, ran a Humpty Dumpty-inspired television commercial during a 2017 Super Bowl. The ad depicted Humpty Dumpty in a hospital using a smartphone application to ask whether he could claim a tax deduction for medical expenses. It would seem that the twin pillars of 21st century American culture, healthcare and the tax code, have give Humpty a new lease on life, liberty, and the pursuit of happiness; thereby, turning the rhyme on it’s head. Apparently nothing is sacred to American consumer advertising. 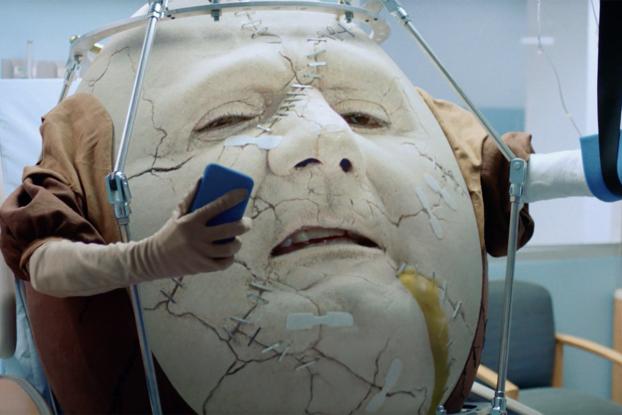 One example, and we can see how folklore, tradition, and myth can run wild to define what “common sense” includes. Is there any wonder why Wesley needed to include both history and reason into the mix. Not only does biblical scripture have 2000 years of changing tradition and folklore built into it’s interpretation, we also have the added issue of language. Yeshua spoke and taught his disciples in his native language of Aramaic, a local language similar to Hebrew. Any oral or early written collection of his teachings would have been in Aramaic, but none have been known to survive. Except perhaps the Gospel of Thomas, where recent scholarship into the extant Greek and Coptic versions have uncovered an early Aramaic core for about 40% of the text that could possibly date back to 50 to 100 CE.

Yeshua’s Aramaic teachings were most likely translated into Greek, the common language of international communication at the time. Some important scriptures survived only in languages such as Coptic, Latin, Syriac, and others. We read them in translated English. Today there is a huge industry for translating the Bible into understandable modern English. Each translation puts its own theological spin and tradition baggage into the text. So when you sit down to contemplate a particular Bible passage, be aware that reason, as well as some knowledge of history and Jewish culture, may be necessary to fully evaluate the text.

It’s not exactly from Yeshua’s lips to your ears.

As Yeshua would no doubt say, “For those with ears to hear, let them hear!”